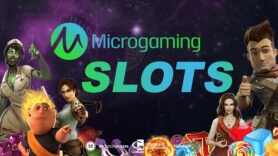 Microgaming is one of the best online slot developers in the world today. Many of their great games are played by thousands of people every day. Some of their most notable games include the likes of Mega Moolah, Game of Thrones, and Immortal Romance.

The company has recently announced its plans to release a whole host of new games for online slots players. They will be released over the next couple of weeks. Some of these new options will be developed by independent studios that are now a part of the Microgaming brand and they will have some innovative themes and content.

Some of the new themes include Roman legends and vast oceans. One of the games is titled Tiki Reward and it has been developed by All41Studios. It launched on November 10 and contains numerous Tiki symbols. The Tiki Wild is a multiplier and allows you to substitute any symbols that are a part of the reels. What’s more, is that there is a lucrative Gold Tiki Jackpot whereby you can get your stake 1,000x if you strike gold.

Another of the new online slots to release in November is Neptune’s Riches, a game that was developed by Just For Win. The release date is November 17 and there is a relaxing and beautiful ocean theme. There are five reels and this high volatility slot has wild symbols that help to boost your overall payout. There is a Rising Wild Respins feature that is triggered by wilds on the 2nd, 3rd, and 4th reels. If you get the special win, there is a 10x multiplier on offer.

November 24 will see Augustus launching, developed by Neon Valley Studio. The Ancient Rome theme sees you being in charge of creating new gold coins for the emperor of Rome. There is the potential of a huge win if you come across the Praetorian Guard on any of the reels. Alchemy Gaming's Reel Gems Deluxe is another new title that is set to launch.

It contains a very exciting feature that is known as Hyperspins. This offers giant symbols and allows users to get unlimited triggers. It is a sequel to what was a popular Reel Gems game. There are extra spins and big prizes on offer.

Finally, there are a couple of other games that Microgaming players can look forward to trying out. Real Dealer Studios has produced Multifire Roulette and Aurum Signature Studios is launching a Tale of Elves.

A titan of the industry

Microgaming has decades of experience in the slots industry, having first started in 1994. It provided the first-ever mobile casino software in 2004 and it has been going from strength to strength ever since. It has some of the biggest progressive jackpots in the world today, with over $1.5 billion being paid out to date.
In order to keep innovating and bringing exciting games to the market, Microgaming has acquired a number of smaller game studios to help build the game library. There are now about a dozen different independent studios working as part of Microgaming.

Over the years, Microgaming and its games have won countless awards across the industry. They have a good reputation of only working with the best online casinos and you always know you will get a solid game experience.

As well as slots, Microgaming also offers the likes of table games and it is currently working on expanding its live dealer offering. This company is certainly here to stay and its latest launch of new games in November is just the most recent step of progress for the company that is based in the Isle of Man.