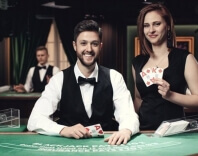 Evolution (recently acquired NetEnt) has a reputation for being the standout supplier of live casino games in the globe today. These titles allow you to feel like you are sitting in a land-based casino as you get to play a casino game with a real dealer thanks to the HD stream.

The company has been expanding its presence across the world in recent times. Having already become very well established in Europe, it has been focused on North American domination in recent years.

It already had deals in place with Loto-Quebec and the BCLC in Canada. Its only Canadian live dealer studio is up and running in Vancouver. Evolution also has studios present in Pennsylvania and New Jersey, with a studio in Michigan under construction.

Evolution has signed an agreement with the AGLC. It also struck a deal with the CBN to offer these lottery operators a selection of live casino games.

The AGLC has now has six of Evolution’s games available through its online casino and it plans to bring more to its online offering in the coming months. Among these new types of live dealer games that players in Alberta will have access to includes a blackjack title, a roulette variant, and basic baccarat. Albertans will be able to play these titles to their heart’s delight.

While CBN is perhaps most familiar to people for being the provider of banknotes to the Bank of Canada. However, another key side of its business is acting as the operator of lotteries on behalf of certain local governments. Therefore, it will now be able to offer Evolution’s live casino games in those regions where these types of games are allowable.

The expansion of live dealer games

These types of live casino games will likely be a major hit as they continue their expansion around North America. The advantage for Evolution in Canada is that it can just use its Vancouver-based studio to covers live games across the nation.

Under US law, Evolution needs to have a live casino studio in each specific state it is going to launch in because there is no allowable for interstate online gambling.

As time goes on, it looks inevitable that further lottery operators in Canada and the United States will also partner up with Evolution.