There are a host of Marvel franchises that have made their way to online casinos – and the Fantastic Four franchise is one of the most popular in that line. Chances are, if you’re in love with the movie franchise or any of the comic heroes it features, then you should give this slots game a try.

Where did the Fantastic Four slots game come from?

Playtech, one of the leading online software games developers and designers, has a deal with Marvel to bring a host of its franchises to the online casino arena – including the likes of X-Men and the Incredible Hulk. Of course, the Fantastic Four feature includes Human Torch, Invisible Woman, Mr Fantastic and The Thing. 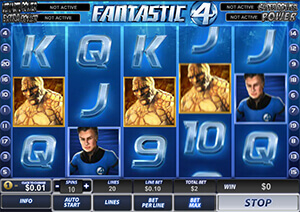 They are all symbols that appear across the reels with the wild symbol taking the form of the Fantastic Four logo itself. In addition, there are high value cards from ace to nine which also are featured as symbols.

What is the animation like for the Fantastic Four slots game?

Each of the four superheroes has an animation that is representative of their super power. For example, Mr Fantastic will stretch to the size of a skyscraper; Invisible Woman will disappear and leave a flash of lightning behind; Human Torch, meanwhile, will ignite himself; and The Thing will flex his muscles before delivering punches.

Meanwhile, the Fantastic Four logo itself will revolve before revealing the word WILD. As for the scatter symbol, it takes the form of the Silver Surfer on his skateboard.

How does the Fantastic Four slots game work?

There are as many as 20 pay-lines to be activated and there are a host of notable features:

- Earth symbols: Three or more will trigger the free games feature which is dependent on the super hero that corresponds.

- Invisible Woman symbol: Features a total bet that is awarded with four additional spins. During these spins, when Invisible Woman appears you will get a multiplier that increases by one.

- Human Torch symbol: This includes a special feature with four extra spins awarded in reel one.

- The Thing symbol: This incorporates three additional spins – when The Thing appears it takes the role of a wild and freezes.

In addition, Fantastic Four includes a progressive jackpot that is tied to the Marvel Mystery jackpot. It is a four level jackpot that occurs randomly after any spin.