Where has The Incredible Hulk slots game come from?

Marvel has a deal in place with Playtech, one of the leading online casino software developers and designers. It has produced a number of Marvel games including the likes of X-Men and the Fantastic Four, but The Incredible Hulk, based around the movie with Edward Norton, is unquestionably one of the most popular.

What are the special features of The Incredible Hulk slots game? 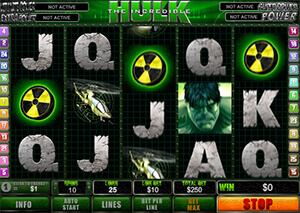 Among the special features of The Incredible Hulk slots game are:

- Hulk symbol: This is the wild feature. When it occurs in the middle of the third reel then it effectively becomes an expanding Hulk and fills the entire third reel. This gives you two re-spins with all other reels spinning. In fact if you get the Hulk symbol across reels two-four, wilds will expand across the three reels and you will then pick up one re-spin with the first and fifth reels spinning.

- Smash bonus: If you pick up a smash bonus symbol on either reels one or five you will be able to view seven police cars – and if you smash three then you will be able to see cash prizes. In addition, you can view three helicopters and smashing one of them allows you to pick up a five times multiplier. Finally, there is a Hulk rage feature which smashes all seven police cars.

- Scatter symbol: This comes in the form of The Incredible Hulk logo. With this scatter symbol – three or more anywhere across the reels – you get the free games feature which entitles you to 10 free spins as well as a three times multiplier.

The Incredible Hulk has become a highly popular online casino game with its range of bonus features playing a key role. The expanding Hulk feature is perhaps the most notable as it has the potential to warn you significant wins. In fact if you get the same symbols across the outer reels then you could be in for a huge success. It’s a medium variance game with significant winning potential, so why not check it out now?