From the roar of the lion to the chatter of the monkey, Mega Moolah has become one of the most popular online casino slot games for its brilliant sound effects, great graphics, and, above all, tempting prizes. Here we take a look at the Mega Moolah success story.

Where did Mega Moolah come from?

Mega Moolah is part of the Microgaming group of games: Microgaming being one of the most successful and influential game online casino game designers in the world.

How do you play Mega Moolah?

At the centre of Mega Moolah is a 25 pay-line slot across five reels. Players decide how many credits to bet from as little as $0.01 to $0.05 with the ability to use up to 125 coins in one play. 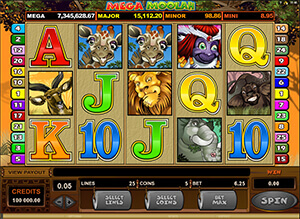 Once that has been decided, players just need to hit the spin button and look for the symbols which include: standard letter symbols and 10 symbols; Kudu, buffalo, zebra, giraffe and elephant symbols; a lion wild symbol; and a monkey scatter symbol.

What are the special features of Mega Moolah?

While many people are drawn to the jackpots of Mega Moolah, there is no doubt that the exciting sounds and cool graphics are among the top reasons to play. Most symbols include features of the various safari animals and when they are a part of the winning spin you will hear that animal’s sound: this means that every time you hear a lion’s roar, you’re likely to get extremely excited.

In addition you should look for:

- Bonus symbols: The lion can be used to stand in for different pieces in order to create winning combinations. With a lion pay-out you can earn as much as 15,000x a wager.

- Scatter symbols: The monkey symbol can trigger free bonus spins that could potentially include a three times multiplier. All players need to do is land on three or more monkeys.

- Free bonus spin: Prompted by the monkey, this will give players a chance to spin and enjoy pay-outs that could be three times higher.

How much can you win with Mega Moolah?

Mega Moolah is famed for featuring progressive jackpots – and around 20 players have scooped jackpots in excess of $1million, with one player even enjoying a $9million win. Jackpots grow from just 10 credits all the way to the $1million marker with the idea being they keep going until the mega jackpot is hit.