It is one of the most popular movie franchises of all time – and now the heavyweight that is Rocky has come to the online casino world in the form of an attractive slots game.

Where has the Rocky slots game come from?

It’s amazing to think that Rocky was first played by Sylvester Stallone back in 1976: but make no mistake, this is not a 40-year-old game thanks to the wizards that are online software developers Playtech. It has managed to transfer the movie into the online slot arena and the result is a game that has earned solid critical acclaim.

How does the Rocky slots game work? 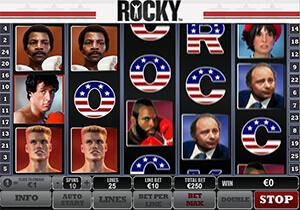 The Rocky game is centred on 25 pay-lines across five reels. Its music sounds like it has been lifted directly from the soundtrack of the movie itself and there are some basic symbols including the letters R-O-C-K-Y as well as the Stars and Stripes. There are higher value symbols, meanwhile, including the likes of Rocky himself, as well as other key characters such as Adrian, Paulie, Apollo Creed, Clubber Lang and Ivan Drago.

What are the special features of the Rocky slots game?

There are several features worth looking out for across the Rocky game, including:

- Rocky feature: This will give you some extra zip as you will pick up a five times multiplier to add on to your total bet when you land on the letters R-O-C-K-Y. Pay-lines become irrelevant here.

- Free spins: Should you get three-five Italian scatter symbols across the reels you can pick up 15, 20 or 25 spins. In addition you will get a double multiplier across every prize you win.

There is no doubt that Playtech has done an outstanding job in bringing the Rocky franchise to life, so why not check out the Rocky slots game now?