One of the leading slot machine games available at online casinos, Starburst is available to both free players and real money players. It has become an instant favourite thanks to its winning combination of fun features and a memorable playing experience.

Where has Starburst slots come from?

Starburst was developed by Net Entertainment, one of the most respected online casino software developers in the world. It includes two different types of symbols, a range of bonus features and much more. 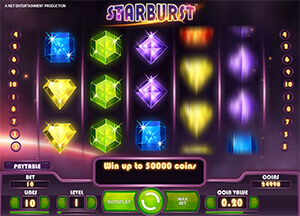 What features does Starburst include?

At the heart of the Starburst game is a five reel that gives players the opportunity to make winning combinations from as many as 10 lines. In addition, it comes with a number of auto play options that actually give players the chance to stop a play during a win as long as the amount has either increased or decreased by the range outlined by the player.

How much can you win with Starburst?

To score a jackpot pay off with Starburst you need 250 coins, while the second payout is 200 per way.

There are a number of features that makes Starburst stand out from the crowd, including:

- Symbols: The level of coins that can be won is dependent on the symbols picked up in the game: there are seven regular symbols as well as a single wild symbol. In the case of the regular symbols, they can give a player anything from five-50 coins with three symbols in the same reel; 10-200 with four symbols; and 25-250 with five symbols. Meanwhile, the wild symbol appears in slots two, three or four and activates the re-spin feature. It can also be used a substitute for other symbols to help complete winning combinations.

- Stacked symbols: These can appear on all five reels and can increase the player’s chance to win.

- Bonus features: The bonus with Starburst is the Re-Spin. It is activated if wild symbols occur in slots two, three or four. When the re-spin is played, the play lines and bets are the same but pay-line selectors and controls are disabled during this process.

- Betting limits: The five reel slot has a minimum betting level of 0.01 with maximums set at 100 per spin. You can make a wager from one coin to 10 coins depending on the pay-line bet. Meanwhile, maximum payouts are set at 250 credits for each line bet.