Are you a fan of the Christopher Nolan Batman franchise? Or do you simply enjoy a great online casino slots game? Either way, you’re likely to fall in love with The Dark Knight Rises slots game.

Where has The Dark Knight Rises slots game come from?

Where you among the first to rush to the cinema to see The Dark Knight Rises, 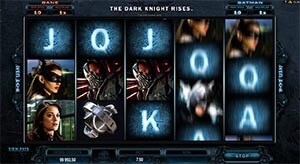 which pitted Batman against Bane and alongside Catwoman in what was the last of the most recent Batman trilogy? The movie was such a huge hit that it was no surprise to see online software giant Microgaming quickly jump on the bandwagon with its second Batman release, following on from the already successful The Dark Knight game. It even features a fabulous soundtrack, similar to that which was included in the movie by Hans Zimmer.

How do you play The Dark Knight Rises slot game?

There are a host of new features included in The Dark Knight Rises such as symbol scramble, split wilds and fight mode: there is even a free spins bonus feature that gives you the chance to pick either Batman or Bane.

At its base, however, The Dark Knight Rises includes 243 ways to win across five reels. This is not a progressive jackpot offering like the previous game and instead it includes a variety of new features such as split wilds, symbol scramble and the accumulator which are activated randomly.

- Symbol Scramble: This is when all of the symbols on the reels move across to different positions to potentially offer you a host of winning combinations.

- Expanding Wild: This expands on the usual wild symbol and is an expanding wild on the third reel.

- Fight Mode: With this feature you pick up a number of random free spins, as well as a multiplier. The idea is that Bane and Batman will fight in order to award the random number of spins and the multiplier that you achieve. You then are rewarded with the free spins bonus feature.

- Free Spins Bonus Feature: This is activated when you scatter bonus symbols. You will pick up 10 free spins and have the chance to play one or two bonus games in which you can select between the hero and the villain of the movie.

If you choose Bane then each win will active a Rolling Reels possibility, which sees winning symbols explode and disappear with new symbols dropping in so you have the chance to win over and over again. With Bane you can also achieve the Super Stacked Wilds when you have activated the free spins bonus on 10 occasions. This has the potential to earn you huge rewards.

Should you select Batman, then you can enjoy the extra wild blast that lets you choose an extra wild to increase your possibilities of a win. In addition you will have access to the heat seeking wild after activating the free spins bonus 10 times. Here random symbols on the third reel will transform into wilds that can split and give you even greater chances to win.

It all sounds rather complicated, but there is no doubt that you have some great winning possibilities with The Dark Knight Rises: which is surely what online casino games are all about.