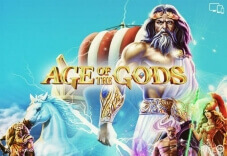 The Age of the Gods series from Playtech has consistently impressed players and operators alike. Available as a series, this collection of games promises exciting themes touching on the divine and mythological. In this series, you have the Gods of the Olympus guarding the reels and a progressive jackpot to keep players happy and engaged for hours.

Thanks to this combination of grand theme and a progressive jackpot, the Age of the Gods series from Playtech is now a favorite slot game offering at top online casinos that accept players from Canada. Almost all of the leading casinos and gaming platforms add these games to their growing portfolio. Eurogrand Casino, a gaming platform of WHG (International) Limited delivers these titles as part of its collection and ongoing promotions. If you are from Canada and looking for an exciting set of games and promotions, then Eurogrand Casino serves as a highly recommended destination.

10 Free Spins from Age of the Gods: Medusa and the Monsters

More than just a popular Playtech title on this casino, Age of the Gods: Medusa and the Monsters is also subject to an ongoing promotion where you can collect up to 10 free spins. To enjoy this offer, you need to click ‘Opt-in’ and stake at least £20 on the Medusa and Monsters game. This promotion runs until the 17th of September. This promotion is about to end but Eurogrand is known to extend its popular promotions or come up with something new for its Canadian players.

Age of the Gods Series as Popular Games at Eurogrand Casino

At Eurogrand Casino, these Playtech slot games are popular and often included in its list of top games of the week. For September, the spotlight is on these games which promise some of the biggest wins in the platform. Some of these games are the Age of the Gods: Medusa and Monsters and the Age of the Gods: Rulers of Olympus. As of the third week of September, the jackpots are currently set at £300,000. But when the jackpots are not won in the next few days, Canadian players can count on millions as jackpots before the end of the month. The Age of the Gods series from Playtech offers 4 types of progressive jackpots and it’s one reason why this is a popular game among Canadian players. These games are only available in real money mode so players are advised to sign up and deposit before playing.