In the money line bet, you can be paid out substantially for betting on the underdog, because it’s a straight up bet on which team you think will win. The number of points does not matter. Instead, the minus symbol (-) is next to the favoured team’s payout number, and the plus (+) symbol is next to the underdog team. Those numbers represent how much you stand to win with a $100 bet. To find out how much the payout will be, the bettor need only click the team they want to bet on and type in an amount 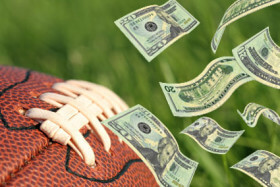 before they have to actually place the bet to see what the payout would be.

Quarter, First Half, and Halftime Lines

Set up the same way as either the point spread of the money line bets, you can bet on who will be up in specific quarters with the quarter bet, or who will be up at halftime with the first half bet. If you understand the previous two bets, you will be able to grasp these two. During halftime, you can also bet on who will win, and the payouts are going to be changing rapidly, so if you have a good feeling, go with it before other gamblers realize the same thing.

Sometimes shortened to O/U or titled “Totals,” the over/under bet is where the bookmaker will guess how many points will be scored in total by both teams combined over the course of the game, and you can either bet that fewer points will be scored or more points will be scored, which are known as the under or over bet, respectively. The payout will be determined based on which of the two options are most likely to happen, though as is the case with most sports, the over and the under bets payout pretty equally.

With props bets, you can bet on specific outcomes in the game and on specific players. For example, you can bet over/under on total number of field goals, fumbles, sacks, etc. You can also bet on how many touchdowns a certain player will score, how many sacks a specific player is going to get, and other, related aspects to the game. Prop bets are normally either yes or no or over/under, and the payout is decided by their likelihood as determined by the bookmaker.