Ice hockey is by far the most popular sport in Canada, both to play personally and to watch the pro-, semi-pro-, and college-level athletes go at it. To most Canadians, watching the sport can be exciting enough on its own, but adding betting into the mix can bring it to a thrilling level of excitement of an unmatched calibre. Here are all the bets you can make on this Canadian pastime. In fact, while early forms of hockey date all the way back to Ancient Egypt 4,000 years ago, ice hockey became what it is today right here in The True North.

The two teams you can bet on in a money line bet will be displayed with a minus (-) or a plus (+). The team with the minus is the team that is favoured by the bookmaker, and the team with the plus is the underdog. The number next to the symbols represents the amount you need to bet in order to win $100, but in online bookmakers, you can type in the amount and it will tell you how much you will win if you win the bet. Money line bets are won if the team you bet on wins. 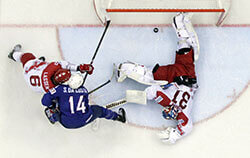 There’s nothing more to it than that.

The puck line bet is also often labeled simply as the “Spread” depending on the casino. In this bet, rather than just it being who wins or loses, the winning team has to beat the spread in order for it to pay out. This evens out the odds for the underdog team, as they do not need to win, they only need to lose by a certain amount. For example, if the Chicago Blackhawks were playing the Montreal Canadiens, and the point spread for the Canadiens was -1½, the Canadiens would have to win by two points for it to pay out. If you bet on the Blackhawks, they would only have either win the game or lose by just one point in order for betting on them to pay out. There will also be a money line for the Puck Line, but that is an indication of how much you need to bet in order to win $100, and you can type in an amount to see what the payout will be before you even place the bet. Normally, since the odds become more evened out, the puck line bet pays out less than the standard money line bet.

Note:Points scored in a penalty shootout do not count toward the overall goals. Instead, one point is added for the winning team. This applies to all bets, including the O/U and Grand Salami.

The Over/Under bet, often shortened to O/U, is a casual and fun alternative to actually betting on the team. The O/U will be displayed as the total number of goals expected by the bookmaker over the course of the game. There is a money line for this one too to represent that amount paid out with a $100 bet, and you can either bet that there will be more goals or fewer goals than the bookmaker predicts. For example, if the Toronto Maple Leafs were playing the Buffalo Sabres, the O/U could be 6 points. You can bet that there will be at least seven points total by betting Over, or that there will be five points or less by betting Under.

The name is fun, and the bet is too. It is very similar to the Over/Under, except that it applies to all the games on that day. The Grand Salami is all the Over/Under points determined by the bookkeeper added together. The total score will be very dependent on where you are in the season. For example, in the regular season, many games could be played on the same day, whereas during playoffs, it could be two or three. In the latter case, there probably will not even be a Grand Salami bet offered, but it is possible.

Once you understand the aforementioned bets, all the other bets on offer will be clear. You can bet on which team will get to a certain number of points first in a specific game, what team will win the Stanley Cup at the beginning of the season, which player will get an MVP or hat trick, and so much more. The other, more unique bets are going to be very contingent on the specific casino, but they can add a lot of fresh excitement that coincide with how the other bets work.