Lacrosse is the official summer sport of Canada, and while it’s not the most popular sport to bet on by any means, it can be a fun alternative to the more common sports bets. In fact, lacrosse bets are often subjected to the “Other Sports” section in online bookmakers, but an understated quality is the unpredictability. Point spreads, the favourite team, the underdog, all the aspects that give the more traditional sports their strategy are at their most unpredictable due mostly to the lack of coverage that lacrosse gets. Whether you are betting on college (the most popular) level or professional level lacrosse, whether you’re betting on men’s or women’s leagues, it can be very exciting, and very profitable.

This win or lose betting option involves two lacrosse teams, one with a minus (-) sign to represent that they are the favoured team, and the other with a plus (+) sign to represent that they are the underdog. The symbols will be next to a number that represents the amount of money that would need to be placed in order to receive a payout. Unlike with a points spread bet, the final score does not make any difference. If you bet on the team that wins, you win the bet, a simplicity that makes it the most popular betting choice. Don’t worry about figuring out how much you’ll win if you bet either, because 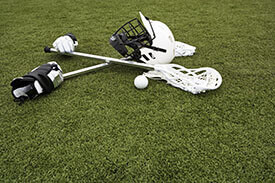 if you type in any amount, the casino will display how much you stand to win

Pro Tip: Despite the unpredictability, always do your research. Like all sports, lacrosse has star players, consistently winning teams, and seasoned coaches.

The bookmaker will sometimes offer an Over/Under bet, which is often shortened to O/U. This is the total number of points they think both teams in a specific game will score. The O/U bet will also have a money line, and you can bet that the two teams will score a total of less than the bookmaker’s guess, or more than. If you are right, you win the payout that applies to the money line. For example, the bookmaker could guess that 15 points will be scored. If they score 14 or less, the under bet wins. If they score 16 or more, the over bet wins.

The events will vary significantly from bookmaker to bookmaker, and some bookmakers won’t even offer lacrosse as a betting option. The evens include both men and women’s NCAA college lacrosse, which is, as aforementioned, the most popular option. You can also bet on the National Lacrosse League, and sometimes even the Canadian Lacrosse League, a professional indoor version played in Ontario. Major events, like the World Championship, the World Indoor Championship, and the European Lacrosse Championship, can also often be bet on.