The biggest single winners in casino history have all been winners of progressive slot jackpots. More specifically, all of the biggest live casino winners have been winners of jackpots from a type of slot game called "Megabucks". Megabucks was introduced in 1989 to casinos in Nevada and still exists today with undoubtedly more big winners in the future.

The world record for the biggest jackpot hit was produced by the Megabucks slot machines for $39.7 million. On March 21, 2003 a 25 year old software engineer from California hit this jackpot playing in a Las Vegas casino after risking $100 on the machine. The odds of this jackpot being hit are said to be about 1 in 16.7 million. 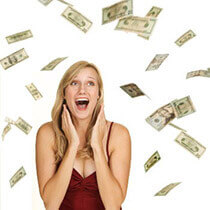 The second largest win in casino history came when the Megabucks was hit again, this time for $34.9 million. On January 26, 2000 a 37 year old waitress, Cynthia Jay-Brennan, hit the jackpot at another Las Vegas casino.

Elmer Sherwin, a 92-year old man, started playing the Megabucks progressive slots when they were first introduced in 1989. He won the a jackpot for $5 million within the first year of playing Megabucks. While not the biggest jackpot or winner in history, Elmer later won a second Megabucks jackpot for $21 million in 2005. Clearly Elmer is one of the luckiest casino winners in history.

Interestingly enough, there was one man who was once at the top of the historical winners list. He is known for turning $50 into a $40 million win before losing it all. Archie Karas was mainly a poker and craps player who was on the longest and largest winning streak of his life. Starting in 1992, he arrived in Las Vegas with $50 and within a few months had turned it into approximately $7 million. His main casino game was poker. Within 6 months Karas had grown his bankroll to $17 million. At that point it was hard for him to find casino games to play, as most players weren't willing to play at the stakes that he wanted.

He then turned his attention to Craps where he could risk much more money and have steady games to play. He continued this hot streak, and by 1995 he had won close to $40 million from high stakes poker and Craps. His streak came to an end that year though, and within a 6 week period he had lost close to $30 million playing Craps. He also ended up losing another $10 million in high stakes poker games.

Online casino games are the future of the casino industry. It is only a matter of time before there are more online jackpots won at amounts that rival live casinos. Who knows, perhaps the next winner could be you?