When TV franchises come to slot games they are usually a big success: and in the case of South Park slots, that success has been backed up by a feature-packed and critically acclaimed offering. So what does South Park slots have to offer? Let’s take a look.

Where does South Park slot come from?

South Park slots are part of Net Entertainment, one of the leading online casino software developers in the world. It has proven to be a massive hit among adults primarily because of the animations involved which closely resemble the characters of the TV show. It effectively provides an experience of the show itself but with the chance to win big cash at the same time.

How do you play South Park? 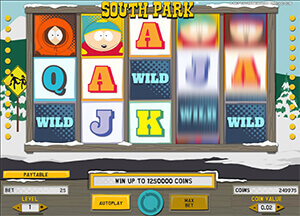 Much like the TV show, South Park slots revolves around the four fictional characters of Kenny, Kyle, Cartman and Stan. Each character has a bonus feature, as well as three mini features.

Bonus features: If you are able to achieve two bonus symbols on the reels three and four with a single character in reel five then you will be able to access that character’s bonus feature. So what can you expect?

Stan Bonus: This gives you a full sense of the South Park experience as you will see Stan throw up on to Wendy so that you get sticky wilds. As this feature begins, you will get the sticky wild in reel three and it will remain there for a further two free spins.

Kyle Bonus: With this feature you pick up 10 free spins. When the Ike baby appears on reel five, Kyle kicks him so that the baby bounces on to one of the five prizes: a 50 coin prize, a 500 coin prize, a double multiplier, a 10x multiplier and a bonus three spins.

Kenny Bonus: in this part of the game you start with three lives and your object is to take Kenny through three different zones. There is a win zone that offers cash prizes; a danger zone that includes a trap; and a multiplier zone with a host of different multiplier values. If you are able to reach the end you can pick up 2,500 coins; and the feature ends when Kenny either reaches the lazt zone or runs out of lives.

Cartman Bonus: Here, Cartman goes in search of his enemies – hippies – in bushes. You take your pick from eight bushes in the hope of revealing cash prizes, a double multiplier or a bonus game symbol. However, the bushes also contain a warning symbol or a game over symbol. Make sure you don’t interrupt the police officer too, as doing this twice will end the bonus feature.

In addition, the game comes with a host of mini-features which will be triggered either at random or by wilds. These include popular characters from the show such as Mr Hankey, Terrance and Phillip. This is a highly entertaining game that will certainly please fans of the show.